In a world of ever-shrinking attention spans and constantly evolving algorithms, brands have just one rein in their control – creatives. But even that has no room for gut feelings or a “let’s throw it on the wall and see what sticks” approach. The sole way to leapfrog the competition is creative testing. It’s only by running creative experiments that teams get data-backed insights on what works and what doesn’t.

That’s why Rocketium, in a session curated with ETBrandEquity, sat down with marketing growth practitioners to shed light on how creative testing reaps dividends for brands. We distill nuggets of wisdom from each speaker here.

Creative Testing: The Building Elements To Experiment In Creatives

Marketing campaigns need creative testing to deliver maximum performance, and this is true for every industry. However, what elements need to be tested do differ for each sector.

For instance, for a retail brand like Vahdam, the copy is not important for CTRs, but for an Edtech brand like Eruditus, it becomes pivotal. Keeping this polarity in mind, the session panel included speakers from varying industries to share key insights from their creative experiments.

How Rebel Foods, An Online Restaurant Company, Does Creative Testing?

The imagery, the copy, and the other elements that Rebel Foods, which owns cloud kitchen brands like Faasos and Behrouz Biryani, use in its creative assets depend on the product. So, while Fasoos has a quirky feel, Behrouz Biryani has a premium tonality. But the central aspect of each creative is visualization because to customers the image of the food speaks the best.

How did they achieve this learning? From heat mapping a few key creatives during testing. Rebel Foods realized that the center of the creative pulls in the maximum amount of user attention. So, that’s where they place their food shots.

Another creative element that they run a lot of experiments on is the background. For them, rich neutral backgrounds that stick to the brand palette give higher CTR, but that too differs for each platform. For example, on Google, black backgrounds were apt, while on Facebook they failed to bring in results.

To battle creative fatigue and blindness, they refresh creatives in a week or two, while keeping a few principles constant:

How Vahdam, An Online Tea Brand, Does Creative Experiments?

For Vahdam’s growth team, creative experimentation is in their DNA. They concentrate on testing during major sales events like Diwali in India or Cyber Monday in the US as they burn roughly 30-40% of their yearly ad spend on these high-impact marketing campaigns. The element tested is the creative unit itself, with experiments run on color, shape, and size.

A critical takeaway for Vahdam from their creative experiments was the first frame of video assets. The rest of the video content or GIFs can remain the same, but testing the very first frame is very important because it forms a dominant part of the story. Adding brand elements to the very first frame is the focal point for most creatives. For Vahdam, native content drove higher clicks than a frame that appeared branded.

A Cyber Monday creative on Facebook that had no brand or sales communication on the main frame (while keeping all other elements the same) had a 4X CTR. The insight? Instead of pushing your communication on the customers, it is better to show the kind of content the user consumes in their feed.

● In email-led campaigns, text-based versions that use a conversational tone bring higher conversions compared to creative-based versions. Also, test subject lines for emails rather than the creative inside.

● When launching a new product range, use creative testing to find the hero product. Keeping all elements of the creative constant, simply change the product to see which one generates the most clicks. Testing this is paramount because investing resources to develop creative variations for every product in the new range is not possible. Rather, find the product that generates the most revenue and then develop variations around it.

● Experimenting with different CTAs or copies is not necessary as they are elements that don’t impact performance immensely. That said, it changes for campaigns. In performance marketing ads, something like “Shop Now” works. In content marketing creatives, CTAs such as “Know More” work better.

What Does Starz Play, An OTT Streaming Site, Test In Their Creative Experiments?

Creative experiments revolve around content for Starz Play, a streaming site like Netflix and Amazon Prime. Static creatives don’t reap the dividends that videos do. But the challenge is, with so much content in their database, how do they incorporate and promote it all in a frame that lasts 6 to 15 seconds?

● Besides video, language is a significant element for creative experiments at Starz Play. Creatives in Arabic drive higher lifetime value for them than in English as they primarily operate in the MENA region.

● Testing different value propositions like Mode of Payments (MOPs) and exclusivity, shows that the first brings in better clicks.

● For content that revolves around sporting events, using renowned faces as models on creatives leads to a 5X higher CTR.

● Being a subscription-based model, adding price to creatives spikes performance only for sporting events, not other content.

● Different CTAs in creatives have slightly different impacts but nothing groundbreaking.

As an eCommerce brand, Bewakoof has a massive catalog. Therefore, they rarely manually develop creatives. Instead, they rely on dynamic ads on Google and Facebook that automatically fetch images in XML format.

70% of their marketing spend is dedicated to these catalog ads, where machine learning picks the optimal product from their website. There is a downside to dynamic ads. They don’t move the needle on brand awareness, perception, influence. Ergo, they channel the remaining 30% towards performance and brand marketing.

It’s for these branding campaigns that they utilize celebrity faces. They superimpose outtakes from brand ambassador photoshoots onto as many graphics as possible. This included maximum usage on app banners to notifications. These creatives have a 25% higher CTR than other creatives.

A noteworthy insight from a creative experiment at Bewakoof is the use of dramatic and thematic ads. Multi-product ads with a consistent theme show 50% better performance than normal catalog shots of a model on a white background. For the simple reason that they’re more attractive and engaging than usual eCommerce shoots.

The Results Of Creative Testing At Clovia, An Online Lingerie And Sleepwear Brand

The decision vectors on creative experiments at Clovia are background, models, fonts, and value proposition.

For backgrounds, solid, bright, and youthful colors in sync with the collection increased revenue by 2.7X. For the model, a single image gave ideal results. These creative experiment results echo the strategy Bewakoof uses too. Clearly, making theme-based creatives is a winning tactic for fashion and retail brands.

To improve the CTR Clovia was getting through discounts, they changed the typography in the creatives. The creative team made the model interact with font along with highlighting the value proposition, which was different looks for different personalities.

Together, they enhanced the CTR by 28% further.

Experimenting with product shots established that flat lays that highlight the USP of the range shown pushed CTR by 52% and revenue by 32%. When it comes to call-to-actions, well-defined CTAs that lead to the exact landing page are ideal.

For social media, doodles with relatable content brought the most engagement. Minimal illustrations that appeal to Millennials and simple, conversational copy rather than formal prompted better outcomes.

How Eruditus, An Edtech Company, Does Creative Testing?

As an Edtech brand, Eruditus utilizes direct response ads with Facebook as their primary channel. Since learning means different things to different people, they use creative testing to identify target personas.

To attract users who are serious about the certification, they use the school building and brand name in the creative.

The second creative would talk to a cohort who’re experts at Excel but know only a bit of Python. So, it uses elements like comparing Excel and Python.

Another strategy Eruditus capitalizes is ‘winners vs. challengers,’ where they experiment with a new creative against an ongoing winner. While ROI/CAC is the ultimate org-wide metric, CTRs is the Northstar metric for creative teams. With creative teams optimizing assets for the rate of decay of CTRs instead of absolute CTRs as it determines the ROI.

When 20 to 30 copywriters and designers churn out thousands of creatives, you build a massive data bank. An easy way to analyze which previous creatives worked best is to use a nomenclature for file names. Essentially, you define how each creative file is named.

Instead of basic tags like “ad 1” and “ad 2,” the file name speaks about the creative. For instance, a creative with a school photograph says SP. Another with learning outcomes says LO.

This helps because when you go back to find out what elements worked, like color or photograph, it’s easier to weed out that specific creative needle from the haystack.

● For products that are not impulsive buys, like courses, copies are the core levers, not the background or visuals. Imagery doesn’t attract customers.

● The biggest impact is from the value proposition, showing career and tangible outcomes.

● Testing background colors proved that a blue background does not work. A white background works excellently on Facebook.

How can you do creative testing?

Insights from these eminent growth marketers are only effective when you implement them. For that, a Creative Management Platform (CMP) that automates testing is a must. It’s the most effective way to run creative experiments as it has a complete range of tools that help design, scale, and manage campaigns in a single location.

With creative automation, you reduce the time spent, a considerable amount of it, on iterating marketing assets for ad testing. It not only gives you base templates that can be easily tweaked but also automates the process of creating variants and generating copies.

Try Rocketium, a CMP that gives your creative and marketing teams freedom to focus on creativity and results, while it does the laborious and tedious chores of running creative testing.

Book a Demo
Next Article 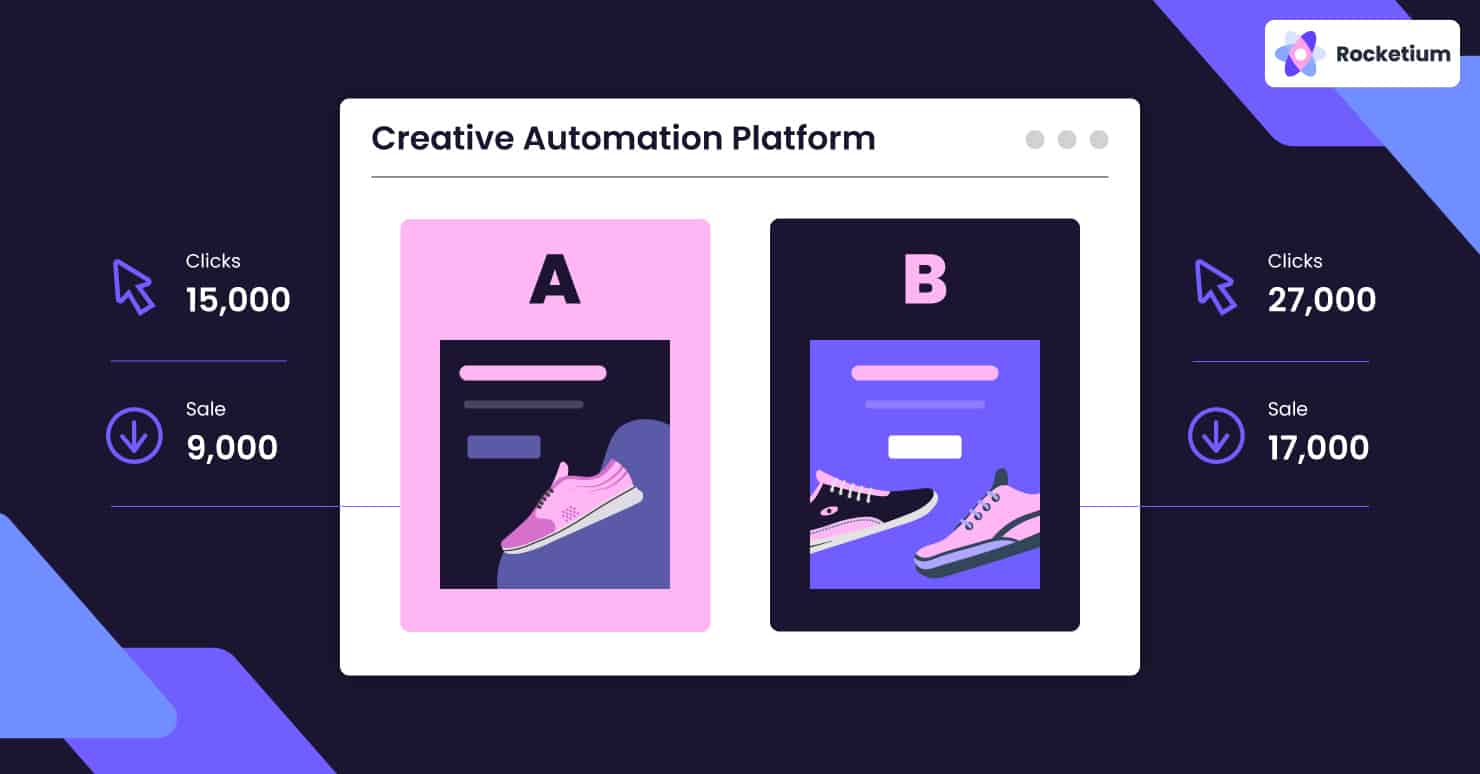 Run faster creative testing and apply winning strategies across campaigns in one go.