The best Renderforest alternative to create on-brand banners and videos at scale, automatically.

Renderforest is a platform to create videos, logos, and videos. It is mostly preferred by YouTubes who create video content for streaming.

Rocketium is a Creative Automation platform that enables SMB's to enterprises to create, manage, distribute on-brand banners and videos.

Renderforest has a collection of a few hundred thousand royalty-free images, video footage, and soundtracks for background music.
Rocketium houses millions of stock images and video clips that can be used in all videos without any copyright infringement issues.

Renderforest allows you to browse through around 500 templates that can be selected for your video.
Rocketium has a collection of 600+ templates, themes, style layouts, animations, and transitions.

On Renderforest, you can upload your own logo, and custom intros and outros to add to your videos.
On Rocketium, you can makebranded videos by uploading your own brand assets – logo, colors, intros, outros, animations, and graphics.

Renderforest does not allow you to collaborate and work together on projects. Each subscription is limited to one user only.
Rocketium lets you collaborate in teams by inviting colleagues via emails or Slack to view, edit, and comment on your videos.

If you run into any issues while using Renderforest, you can check out their online docs, or write an email to the customer support.
While using Rocketium, you can have a live chat with a dedicated support team or reach out to the team via email and phone.

You can upload a voiceover for your video on Renderforest's video editor. Note that you need to record this somewhere else and then import the audio file.
Inside Rocketium's video editor, you will find a dedicated section through which can either upload or record your own voice narration using the editor.

There is no restriction on the length of the video in any Rocketium plan. The only limitation is on the number of scenes that can be added per video.

Renderforest does not give you any white-label options.
Rocketium's video editor can be integrated inside your product, allowing your users to make videos without leaving your platform. Read more about Rocketium's white-label solution.

Renderforest's APIs cannot be used to create videos from online, web-based forms.
Rocketium's video APIs are built in a way where you can make videos based on the responses of forms and surveys. Read more about form to video.

Rocketium offers a wide range of video templates, design themes, scene layouts, motion graphics, animations, and scene transitions. This is perfect for businesses and digital marketers looking for specific use-cases for their industry. Just pick a template, add your assets and the video will be ready!

Customization: Edit preset templates to make them your own 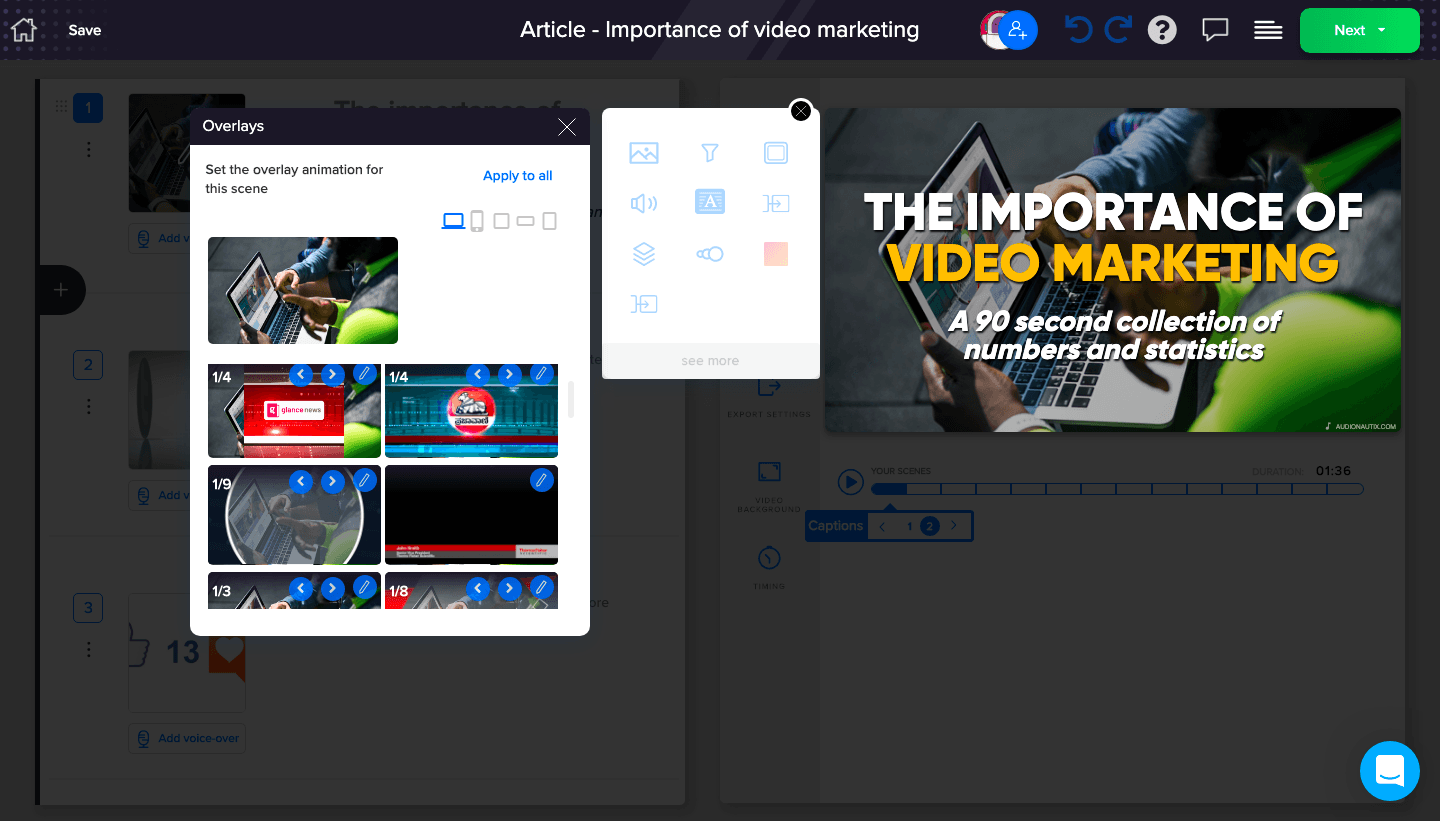 On Rocketium you can customize readymade templates by changing the fonts, video background music, aspect ratio, and the colors of text, animations, and background. Customization options give you complete control of your video – just like it should be.

Did you know that with just ten languages - English, Chinese Mandarin, Spanish, Arabic, Portuguese, Japanese, Russian, Malay, French, and German, you can communicate with 77.9% of all the Internet users in the world? Use Rocketium to make and translate videos in all of these languages, and more! 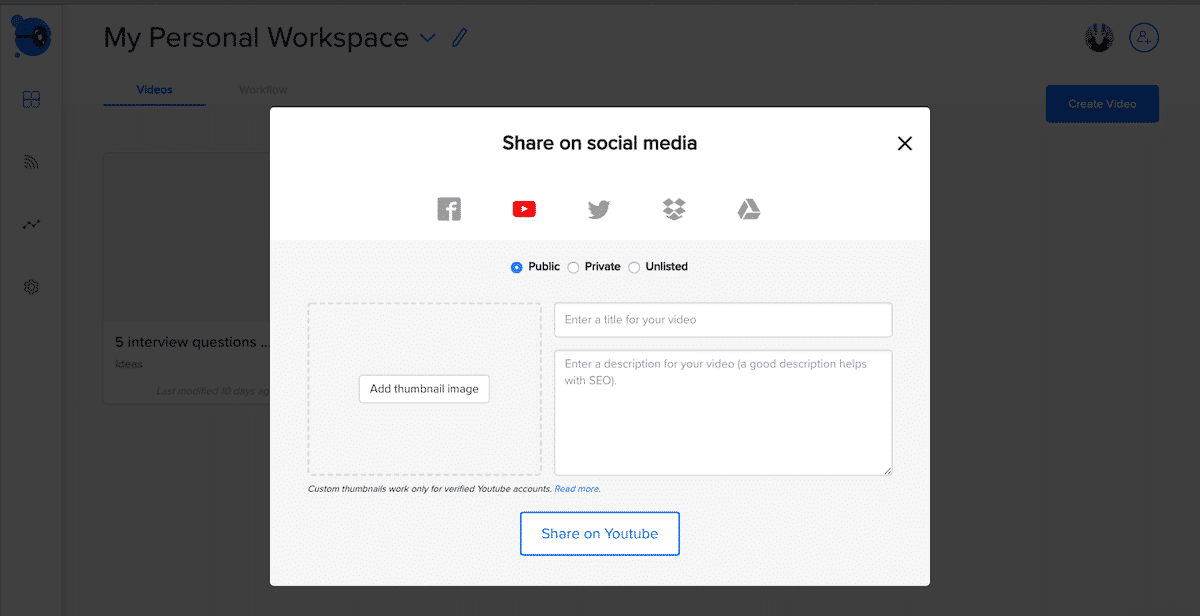 Branding: Add your brand's assets to all videos 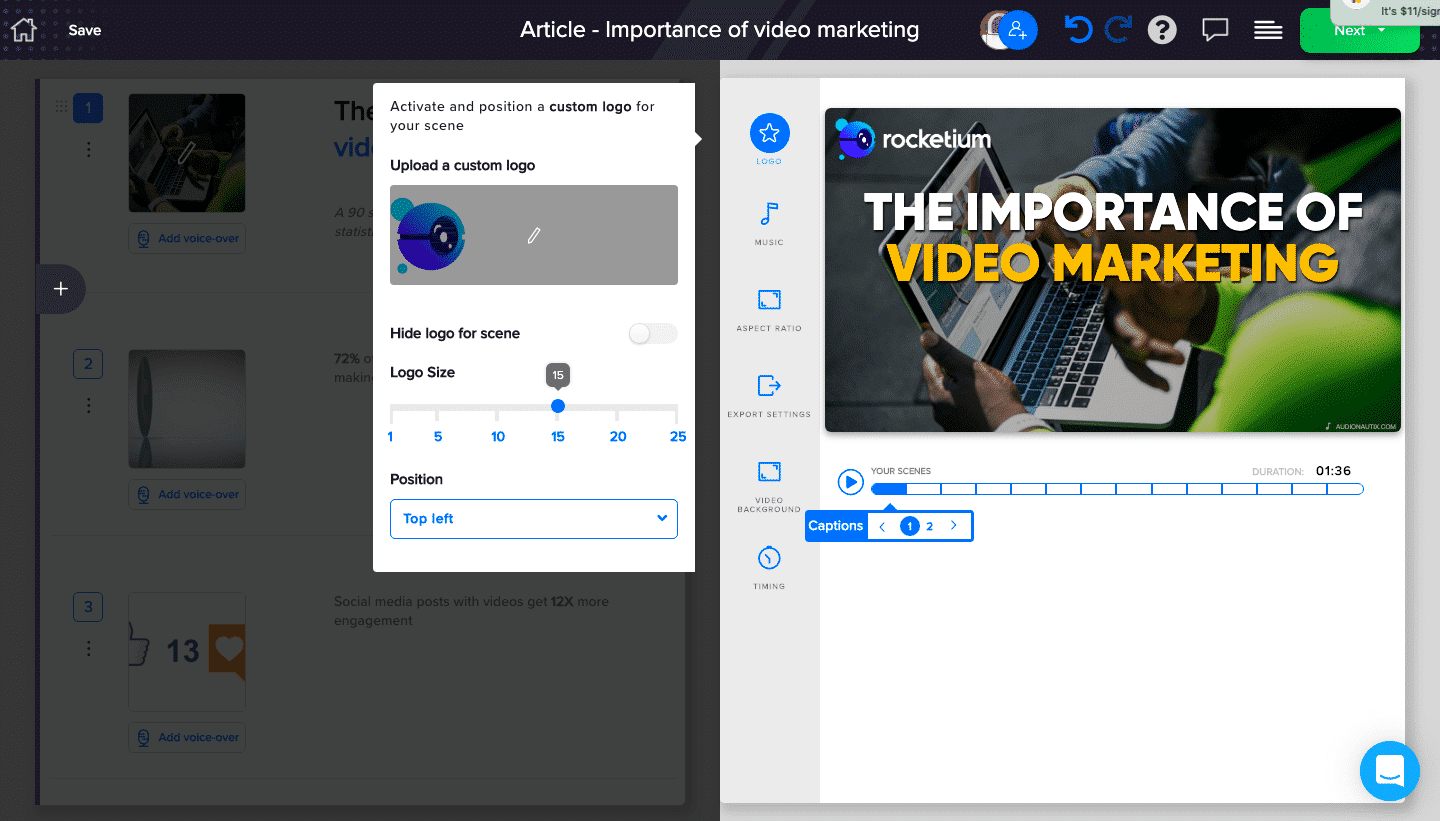 By following basic branding practices, you can improve brand awareness exponentially. In Rocketium's video editor, you can add your own logo, intro, outro, color palette, and fonts. To add to this, you can also upload your own music tracks, custom animations, transitions, and motion graphics!

Create Trello like boards to manage video creation Kanban style! Assign videos to colleagues, get them reviewed in real-time, track your progress, and improve productivity across your video and content teams. Rocketium’s collaboration workspace lets you categorize videos into task lists for a unified view of all video projects. 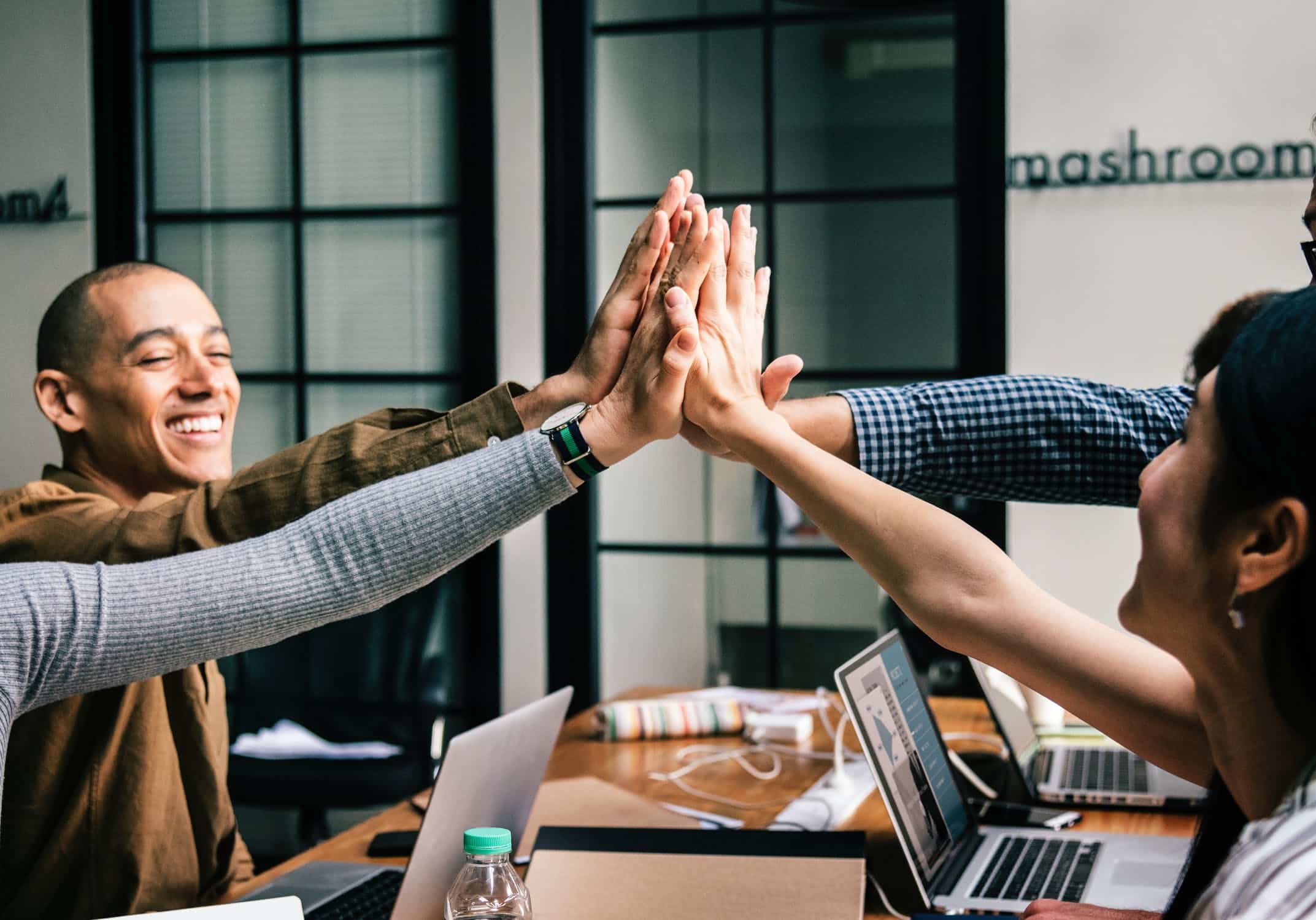 Rocketium has a dedicated customer support team that is available on live chat, via email, and over phone. You can also apply for a dedicated account manager whose sole responsibility is to ensure that your metrics improve exponentially!

White-label: Add a video editor inside your product 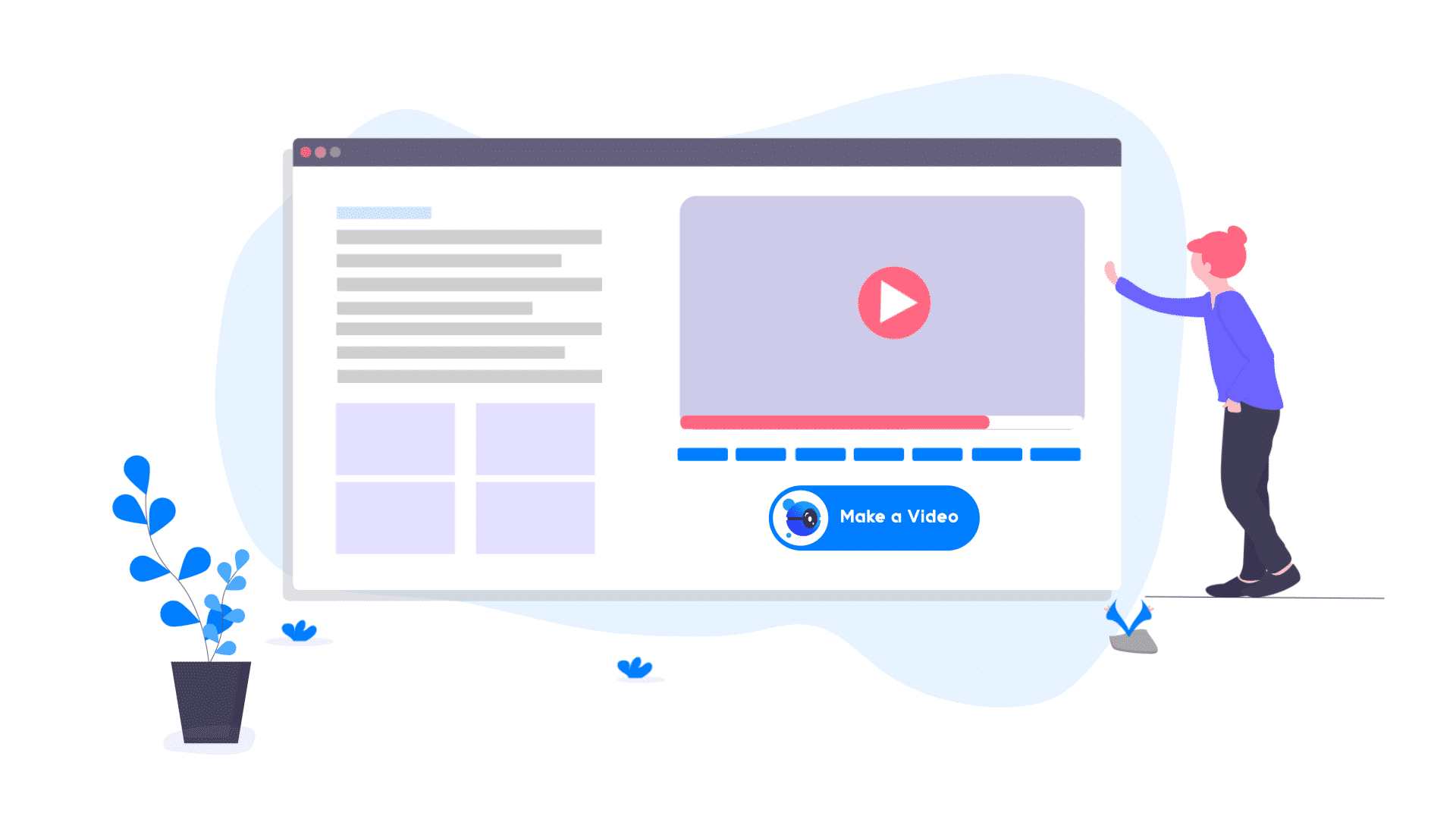 Quickly embed Rocketium's video form on your web page. Collect user responses and make personalized videos based on these responses to the fields in your form. Perfect for Saas onboarding, user-generated content (UGC) videos and for creating bulk videos with ease!