A range of shades of gray without any apparent color. The darkest color that is possible is black, which means the total absence of transmitted or reflected light and white is the lightest possible shade. The total transmission of light at all visible wavelengths. Intermediate shades of gray are represented by an equal amount of the three primary pigment cyan, magenta, and yellow for reflected light. The lightness of the gray is directly proportional to the number representing the brightness level of primary colors. Black is portrayed by R = G = B = 0 or R = G = B = 00000000, and white is portrayed by R = G = B = 255 or R = G = B = 11111111. Since there are 8 bits in the binary representation of the gray level, this imaging method is called an 8-bit grayscale. Also called black and white in the analog practice which is not the quite right name because as a halftone, it is pure white and pure black. The illusion of gray shading in a halftone image is obtained by rendering the image as a grid of black dots on a white background the sizes of individual dots will determine the lightness of the gray in their vicinity. Commonly used for printing photographs in the newspaper. In a grayscale in the image, the hue and the saturation of each pixel is equal to 0. The brightness is the only parameter of a pixel that can vary. It can range from a minimum of a 0 (black) to a maximum of 100 (white). 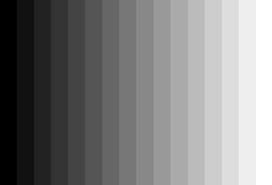