ET Brand Equity Team will get in touch with you shortly with your registration details.
<< Results for terms beginning with A // Aspect Ratio

What is Aspect Ratio?

Aspect ratio describes the proportional relationship between the width and height of an image. It is denoted by two numbers separated by a colon between them in the form of X:Y.

Aspect ratio does not describe the size, it is just a ratio. This means that no matter what the size of the actual image is if the width is divided into X units of length and the height is measured with the same length unit, it measures up to Y.

Aspect ratio does not describe the size, it is just a ratio 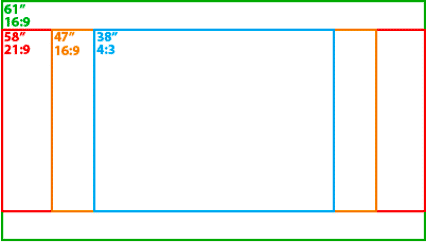 4:3 aspect ratio has been used since the invention of the motion camera. Early monitors also used a 4:3 aspect ratio. This aspect ratio became a motion picture standard in 1909 as cameras used 35 mm films for decades.

With the emergence of HDTVs, the 4:3 aspect ratio is slowly being phased out.

The 16:9 aspect ratio has gotten prominence since 2010 with the increase of HD content. As the popularity of TV increased, the film industry suffered a lot of financial loses as people stopped going to cinemas.

To gain more audience, filmmakers started increasing the aspect ratios of the films to give better quality content that could not be experienced in the standard TVs. As technology progressed, wider screens could be created to provide better resolution.

To accommodate films of both 4:3 and wide-screen, the aspect ratio 16:9 was created.